His perfect pitch, sight-reading and excellent technique gave him the opportunity to act in various concert halls among the most famous accordionists, like Richard Galliano, amongst many others.

As a contemporary accordionist, João Barradas has collaborated with composers Pedro Carneiro, Nuno da Rocha or Dimitris Andrikopoulos, amongst others.

In 2016, he recorded “Directions”, his first album as bandleader with the New Yorker label Inner Circle Music, produced by Greg Osby and with special participation of Gil Goldstein and Sara Serpa. „Directions“ was released 2017 by NISCHO Records.

“The classical accordion is undergoing a 21st century renaissance – and Portuguese-born ECHO Rising Star João Barradas is in the vanguard.” – Barbican Centre

“A new name to look out for was accordion player João Barradas, who is one of the rising stars of a very interesting young Portuguese jazz scene. His music offers structure and freedom, freshness and exciting waves of melodies and rhythms.” – Jazzwise 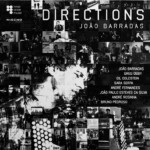