HOME  is a project led by João Barradas, accordionist and rising star of the Portuguese jazz scene. After his celebrated debut album Directions, this project unfolds with a musical style somewhere between jazz, improvised music and rock where the passion for complex bars really shows.

“Just Fantastic” – Randy Brecker.
Brecker elected João Barradas as the Winner of Made in New York Jazz Competition in 2016 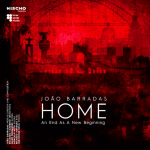