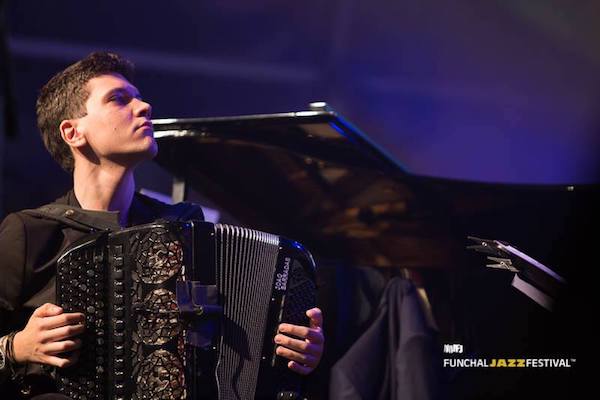 “(…) the first concert at Santa Catarina Gardens on the first night of Funchal’s 18th edition (Acosta’s fourth), as 25-year-old João Barradas improvised on button accordion to the pitches and rhythms of a verbal dialog between Wayne Shorter and Joe Lovano about the pleasures of, as Shorter put it, “drawing on all the sounds that exist in the world.”

Barradas executed a brief fanfare as Shorter said, “Leave some room for the accordion!” Then, as Lovano riposted, “It’s the spirit of the players that translate your expressive ideas …,” he cued a brief drum solo by Bruno Pedroso, and left a few bars of silence as Lovano finished, “…to whatever it is that you play, and the fantasy and imagery that comes through.”

This was an apropos metaphor for what Barradas, who usually plays trio with Pedroso and bassist André Rosinha, accomplished with a strong sextet: fellow Portuguese musicians João Paulo Esteves da Silva on piano and André Fernandes on guitar, along with alto saxophonist Greg Osby, whose imprint label, Inner Circle, released Barradas’ early 2017 album Directions, on which Gil Goldstein and Sara Serpa join the aforementioned personnel.

Titled “Expressive Idea/Unknown Identity,” the opening piece began with all members playing their sounds as Da Silva articulated a disjunctive Andrew Hill-like melody. It coalesced into a freeboppish swing motif over which Barradas played a fleet, saxophonistic line. The time broke apart, a pause ensued, Barradas and Osby played a fleet one-voice unison. Osby broke off into an improvisation of shifting densities and rhythms, setting up his protégé’s solo, in which the accordionist mirrored Osby’s tonality and phrasing at high velocity while also comping for himself. He switched into a not-quite-rubato section, then reaccelerated, weaving in and out of the rhythm with compression-and-release figures.

Throughout the remaining five numbers, Barradas deployed prodigious chops towards entirely musical ends. On “Letter To Mother’s Immersion,” a simmering Astor Piazzolla-esque tango, he followed a piano-guitar dialog with winding lines over Pedroso’s fragmented beats, ending with a pointillist passage. He switched to Midi accordion on “Varazdin’s Landscape”—it began with a rubato a cappella introduction that evoked the tones of harpischord and organ before the tempo settled into a medium-slow groove that propelled Osby into several choruses on which he navigated the alto’s lower register with pellucid tone. There followed an interweaving alto-accordion section in which it was hard to distinguish one timbre from the other. Da Silva unfurled a lovely, romantic solo episode, then improvised as the group developed his motif, then cued Barradas into a guitaristic, percussive solo.

Imperatives of tonal conversation and sonic speculation infused the remainder of the set, comprising “The Red Badge Of Courage,” “Manners Of Normality” and “Ignorance,” on which Barradas displayed an admixture of formidable chops, rhythmic legerdemain, a comprehensive vocabulary spanning Bach to Bird to … well, Osby …, and an unfailingly compositional sensibility.”